The Treaty of Waitangi

Creating the replicas for the Treaty 2 U exhibition

7 days to write, 7 months to sign, 165 years to debate... and counting.   The Treaty of Waitangi is New Zealand's founding document - of the nation in its current form, anyway.   The Treaty has been the source of much controversy over the years; to increase awareness and understanding of this important and living part of New Zealand's history, an educational exhibition of the nine treaty documents, Treaty 2 U, is currently touring New Zealand, bringing the Treaty to the people.

Because of his experience in creating ‘aged’ documents for film props, Daniel Reeve was selected for the job of turning flat printouts of the Treaty documents into three-dimensional, life-like replicas.   Daniel explains the process.... 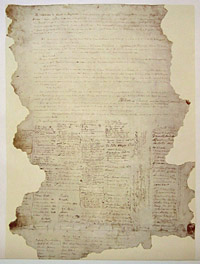 1. The original printout, top half

“The first challenge was to introduce the buckling and cockling effects into the paper (these wrinkles and undulations are especially evident in the two parchment documents, the Waitangi sheet and the South Island sheet).   The high-quality paper used for the Treaty printouts is, of course, very resistant to being distorted, but where there is a will, there is a way....

"I created a mould of the main undulations on a piece of plywood, then, after soaking the printout (in the bath!) for some time, laid it over the mould, and applied pressure from above, with a kind of ‘reverse’ mould strapped into place.   The piece was left for a day to dry.

3. The printout is soaked, then moulded under tension

"Next, a specially trained team of rats was set to gnawing the edges of the document, after being instructed to stop when they reached the...   No, not really!   The edges were torn, millimetre by millimetre, wherever they needed to look rat-eaten or frayed or otherwise distressed; and cut with a craft knife in other areas.

4. Edges are torn, then coloured

"Now the buckling process was able to be finished.   By re-wetting the margins and letting them dry again, unrestrained this time, the edges were given an extra bit of curl.   Extra cockling was also added to the centre parts of the South Island treaty by using this same ‘selective wetting’ method.

"The ‘paper’ documents underwent this soaking and drying process too, but without the forced mould, to achieve a more subtle effect.

"Then I coloured the torn/cut edges with acrylic paint (in the case of the Waitangi sheet, a watercolour stain was applied first).

"Many of the paper documents have distinctive creases – these have also been reproduced.   For several documents, there were also holes, tears, and fractured creases; there were documents joined as per the original documents, or, in some cases, joined to reproduce the look of the repairs the originals have undergone, these repairs now being part of the history of the artifacts. 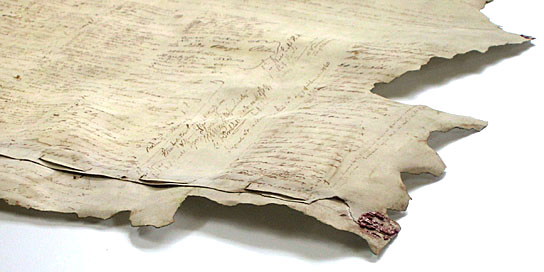 5. The stitching on the Waitangi sheet, and wax seals

"The Waitangi sheet has a join across the middle, the two halves being stitched together with a strip of vellum.   I cut the ‘vellum’ ribbon from a print of the centre section of the Treaty, and joined the pieces by replicating the stitching of the original.   Careful gluing at this point allowed the undulations to be ‘set’ across this section.

"Next came the crumbling wax seals. I investigated using ordinary sealing wax for these, but found that acrylic paint was indistinguishable from it, and easier to control.   The seals were built up in layers to achieve the required thickness, and then trimmed with a craft knife where necessary. 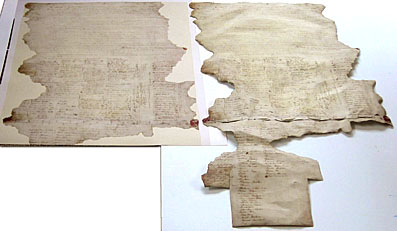 6. Backup printout and finished replica, photographed side by side

"Finally, I mounted the nine finished replicas on charcoal-coloured matt board, using paper hinges and non-acidic acrylic adhesive, and installed them in their display cases, ready to tour New Zealand" 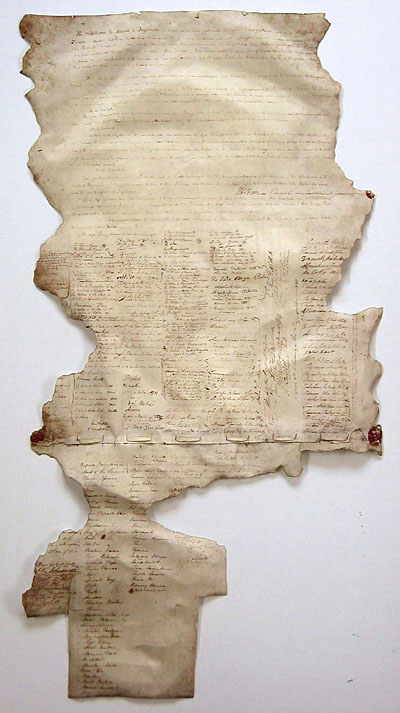